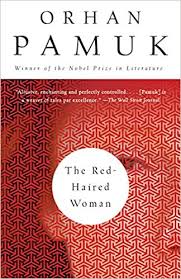 I had a hard time getting into this book. But when I did, I found that I enjoyed it more than I’ve enjoyed reading other novels Pamuk has written. The book’s appeal probably also lies in the fact that it is one of his shorter works.

The story falls into three parts, each of which is quite distinct.

The first part is both the simplest and the easiest to like. The narrator Cem tells of a job he took after his father, who was involved in a left wing group, had disappeared and before his university entrance exams. This involved working as an apprentice to a traditional well-digger. The story describes the process of well-digging and Cem’s relationship with his master, a father figure who tells him stories. Cem becomes obsessed with the red-haired woman of the title, and eventually discovers that she works in a travelling theatre with her husband. This part comes to a dramatic conclusion.

In the second part ,the older narrator continues the story and describes his progression, first in marrying, then by running a company that invests in developing new suburbs of Istanbul, one of which is the town in which the first part is set. The company becomes very successful, Cem discovers that his master survived and succeeded in finding water and completing the well, and that the red-haired woman was a former lover of his father, and the son of the red-haired woman claims that Cem is his father. This story also builds to a dramatic confrontation in which Cem is led by a man claiming to be his son’s friend to see the well, eventually revealing himself as the son, leading to a fight in which Cem’s gun is fired. So if the first part paralleled Oedipus, this is closer to Rostam and Sohrab.

The third part is related by the red-haired woman, which made for an interesting change of perspective. The son is in prison accused of Cem’s murder, and she visits him and tells him her story and Cem’s. She encourages him to write his father’s story, which explains how the first two parts came to be written.

This is a book meant for an introduction into the world of Orhan Pamuk. It is reflective of everything associated with his writing: a depth of plot, complex characters, intriguing perspectives, and so much more. It’s also reflective of my biggest criticism of Pamuk – that he tries to do too much. There are parts here which feel forced, and unnecessary, as with several other works of his. As a result, it’s a perfect introduction, and good material to assess whether or not you’ll enjoy reading Orhan Pamuk.

Glimpse into the Archives – by Month, or a Search