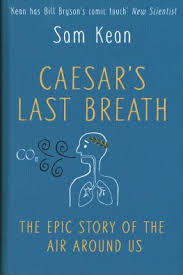 At it’s very core, this book is decidedly boring. There’s no reason for it to be interesting. It’s a book about the history of atmospheric gases. That basically means its stuff that’s literally, around us. Caesar’s Last Breath, may, in Shakespeare’s work, have produced some of the best lines of plays that we remember, but in reality, it probably was boring as well.

Safe to say, I was wrong about wondering why Rohan Joshi was reading this. The only reason I ended up procuring it was because the cover and the title amused me. By the end of the book, however, I was more amused by how shockingly little I know about the world. This book reinstated my belief in non-fiction writing and the importance of learning more by reading.

The argument Kean makes throughout this work is fascinating – that the air we breath today is made from what it was before we breathed it. That may sound confusing, but is perhaps the most apt way I can think of, to describe his argument. More broadly, the air you’re breathing in right now, could be the same air that Caesar breathed out when he last died.

This book ties together some of my favourite things: humour, history, and Science. Kean argues with tenacity and passion, and chronologically (for the most part) ties together an understanding of the air around us.

Caesar’s Last Breath ends not in the past, but in the future, with some dazzling speculation about what might go through the minds, not to mention the bodies, of the first space travelers to inhale the air of a planet beyond our solar system. It was a book I thoroughly enjoyed reading, and will recommend to everyone interested in Earth History in general.

A Glimpse into the Archives

Do you know what you’re looking for?